Tutorial videos, articles and how-to guides for using Katana.
Contact us at support@katanamrp.com or via live chat if you have any additional questions.
Read the latest product news at katanamrp.com/news

If you have created multiple Locations either in Shopify or Katana, you can map your locations between platforms.

Mapping the Locations enables you to pull in sales orders from Shopify to selected Locations in Katana. Your stock levels will also be synced back from specific Katana Locations to the respective Shopify Locations. Read more below.

Mapping the Locations is the first step of the integration connection flow. Read more about connecting Shopify. 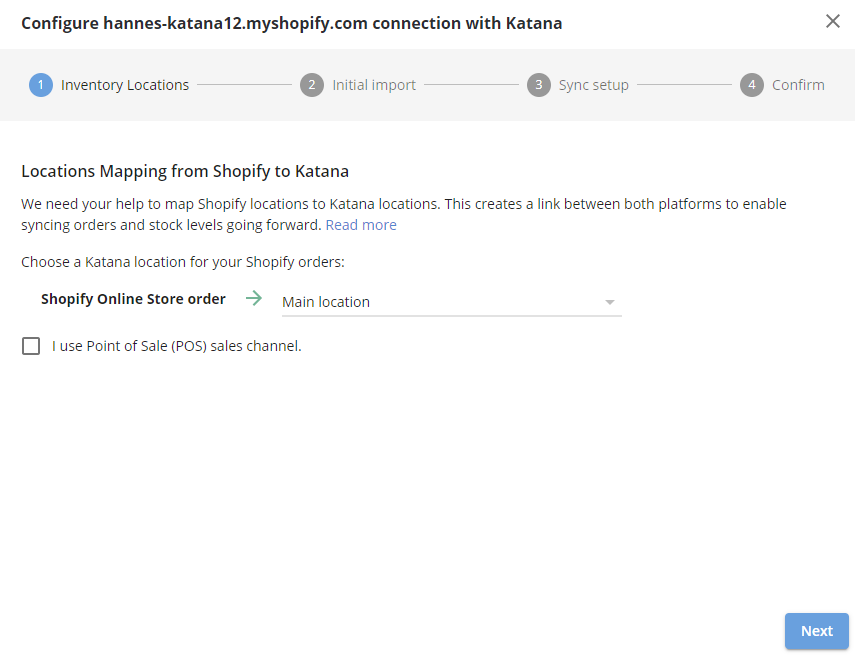 1. Firstly, select a Katana Location for your Shopify Online Store orders. All orders placed by customers on your online store will be imported to that Location in Katana.

2. If you are using Shopify POS (Point-of-Sale), tick "I use POS sales channel". This enables you to select which Shopify Locations are used for POS and map each POS Location to a matching Katana Location.

All Shopify Locations that have not been selected will be mapped to the same Katana Location as your Shopify Online Store orders.

Important! Only Sales Orders placed in Shopify POS have reliable location data that can be used for determining the correct Location when the order is pulled into Katana. Therefore, you are only advised to map your Shopify POS locations to Katana, and data from all other Shopify Locations should be pulled to your Shopify Online Store orders Location. If you map locations that are not used for Shopify POS orders, then those Shopify orders might not be pulled to the correct Katana Location each time.

Stock import from Shopify to Katana with multiple Locations

Stock import from Shopify to Katana is Location-specific based on your Location mapping.

If you choose to import your Shopify stock quantities to Katana during the initial connection (read more) then the stock quantities from each Shopify Location will be imported to the mapped Location in Katana.

Stock sync from Katana to Shopify with multiple Locations

Stock sync from Katana to Shopify is also Location-specific based on your Location mapping. Read more about stock sync in general.

Stock from a specific Katana Location used for tracking stock for a POS Location (e.g. retail store) will be synced to the respective mapped Shopify POS Location.

The stock levels from the Katana Location that is mapped to your Shopify Online Store Location will be pushed to the Location in Shopify that's used for online orders.

Connecting Shopify
Shopify integration overview
How to sync stock levels from Katana to Shopify?
How are Sales Orders synced between Shopify and Katana?
How to import initial stock levels from Shopify to Katana?